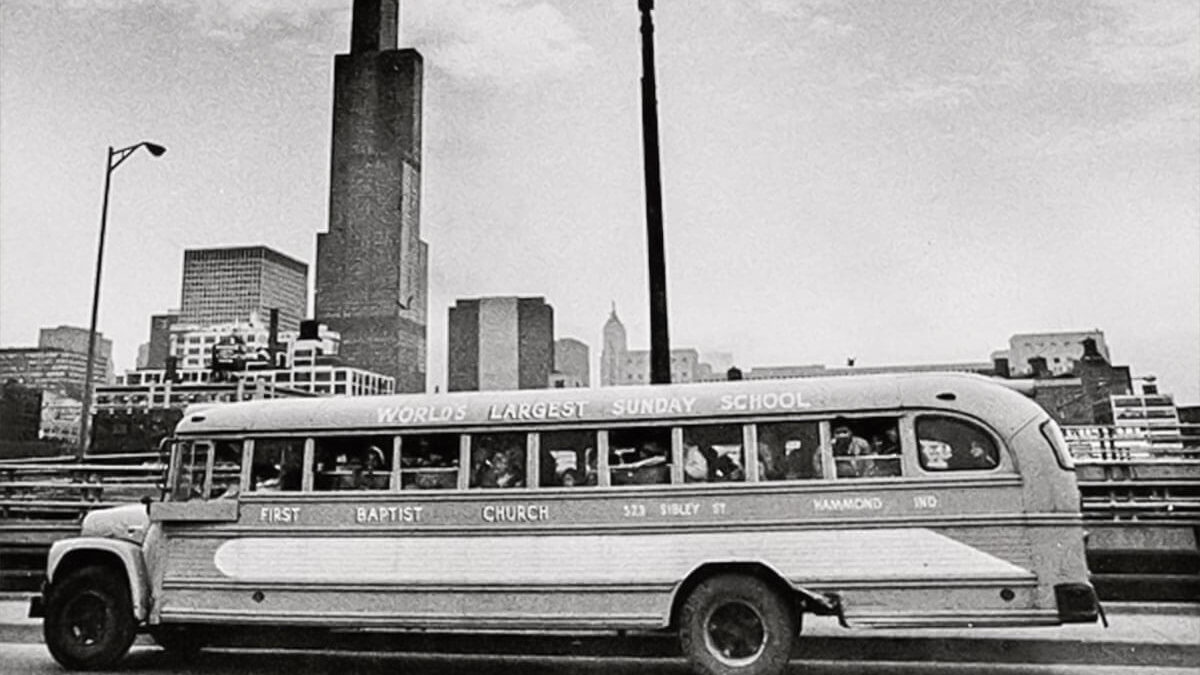 The Bus Ministry has been unarguably the most impactful tool available to our churches within the past 60-70 years. No other ministry has seen more results in salvations, baptisms, and other decisions than the bus ministry has seen in just the relatively short time since its formalization. But have you ever wondered how the bus ministry first began? Easily, you can see the principles and examples of the bus ministry in the Bible, referencing passages like bringing the lame man to Jesus in Luke 5:18-26, the master’s supper in Luke 14:15-24, and the early church in Acts. But where and when did it truly take form?

The modern form of the bus ministry can trace its roots back as early as 1887 when D. L. Moody would park horse-drawn “Church Wagons” on the outskirts of Chicago. Farmers who had horses would pull the “Church Wagons” and pick up other farmers and people who did not have any transportation and bring them to the church services. They would then pull the wagons back to their farms after church and leave the wagons parked there throughout the week until the next service.

Churches began trying to reach people that did not normally come to church because of the lack of transportation. In the 1920’s, there is documentation of a church in South Georgia running a 1919 Packard truck and another church in Milwaukee, Wisconsin, running a 1928 Ford bus and taking people to church. By April of 1948, the Highland Park Baptist Church in Chattanooga, Tennessee, under Dr. Lee Roberson and bus director M.J. Parker had brought up to 1,200 people to church on only 10 buses.

Obviously, one of the biggest proponents that pushed the bus ministry to be the national avenue for explosive growth was the First Baptist Church in Hammond, Indiana. The First Baptist Church officially began its bus ministry in 1961. The bus ministry there grew by several hundred every year, and Dr. Jack Hyles wrote in his Church Manual that their bus ministry had grown to over 1,500 by 1968. The First Baptist Church had record-breaking days within the next decade with 5,030 bus riders one Sunday during the fall of 1970 with a total of 11,348 people in Sunday school. On December 16, 1973, they had 23,024 in Sunday school with many being brought on their 204 buses (not all of these buses were owned; many were rented at the time). Just three years later on May 16, 1976, they had 26,706 in Sunday school, again many being brought on their 437 buses that they ran that day.

But the First Baptist Church was not the only church or even the only denomination running buses in the 1960s and 1970s. The Southern Baptist Convention had promoted “Church Bus Evangelism” with speakers like William A. Powel, James E. Coggin, and Gardiner Gentry, endorsing Southern Baptist Churches to start bus ministries in their churches. “Joy Bus Evangelism” became a structured program within the Church of Christ under Albert Hill and Carl Wade, with hundreds of churches in their congregation beginning to run Joy Buses.

Another giant advocate for this new ministry was Wally Beebe who became affectionately known as “Mr. Bus.” Dr. Beebe worked in the bus ministry for churches like the Thomas Road Baptist Church in Lynchburg, Virginia, under Jerry Falwell and the First Baptist Church in Hammond, Indiana, with Dr. Jack Hyles. Across America, revival meetings were being held where Dr. Beebe would preach and teach about the bus ministry. He was also the editor in chief for the Church Bus News which eventually was transferred to Jeff Fugate in 2002.

The blooming bus ministry was not without critics though. An article entitled “Visions of Bubble Gum” in the 1973 July/August edition of Faith For the Family harshly criticized the promotional tactics of bus ministry “giveaways.” John R. Rice defended the bus ministry in the Sword of the Lord, citing the largest bus ministries at the time to prove that the methods used were correct. Several of those churches included the following:

These churches were led by such men as Dr. Jack Hyles, Dr. Tom Malone, Dr. John W. Rawlings, Dr. Lee Roberson, Dr. J.R. Faulkner, Dr. Raymond Hancock, Dr. Bobby Roberson, and Dr. Harold Henniger. Dr. Jim Vineyard also was a tremendous leader in the bus ministry by working directly with three of the churches listed above (Landmark Baptist Temple, Thomas Road Baptist Church, and the First Baptist Church in Hammond, Indiana). By the time Jim Vineyard had left the Thomas Road Baptist Church with Jerry Falwell, the church was averaging 78 buses weekly and had high days of over 2,100 riders in 1971. Also, while working with the First Baptist Church in Hammond, Indiana, the church ran an average of 187 buses in 1974.

It would be nearly impossible to capture every important and impressive statistic regarding the bus ministry during this dynamic time period. Since the late 1980s and early 1990s, we have witnessed a general shifting of emphasis away from the bus ministry and towards other “outreach methods.”  However, I would like to remind every reader of this article that there remains an undisputed, historically proven fact that the bus ministry works. Even in this day, you would be hard pressed to find another ministry which sees as many salvation and baptism decisions as the bus ministry produces. At the North Valley Baptist Church, we have been able to bring nearly 1.5 million riders to church through our bus ministry alone since our founding in 1975. The bus ministry is not without its faults, and every ministry of the church is important; but let us not forget or neglect the spiritual and historical impact that the bus ministry has seen and is currently making for eternity.

Below are some of the books that were used in the compiling of the historical information stated above. The views, contents, and authors of these books do not necessarily represent the beliefs and practices of the North Valley Baptist Church.

Luke Flood serves on staff as the bus director and is responsible for seeing hundreds of people in church on a weekly basis. He is a true product of North Valley Baptist Church. Having grown up in a wonderful Christian family, he attended North Valley Baptist Schools from kindergarten through twelfth grade. After graduation, he attended Golden State Baptist College where he earned both his bachelor’s and master’s degrees.

What to Expect in the Tent

A Call for Spiritual Discernment in a Social-Media Day

Tips for Preparing the Church Bulletin