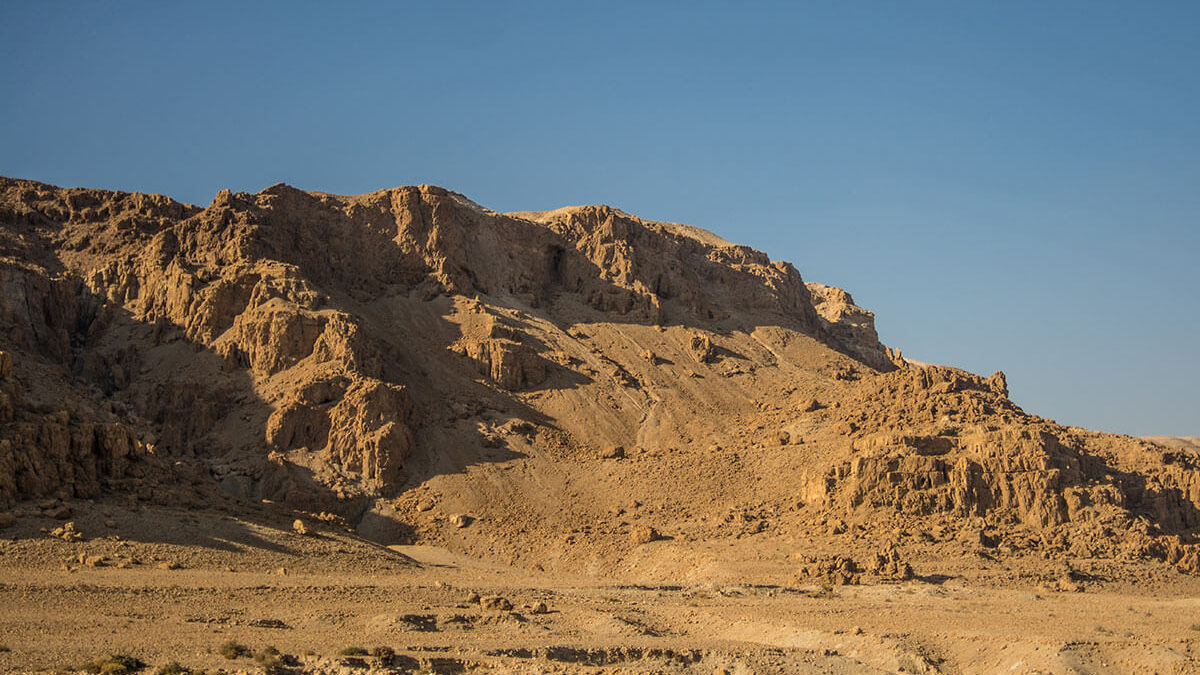 Once you’ve been there, you never forget it: Dead Sea.  Dryness. Desert. Nothing grows, everything dies. No one chooses to live in a cave in the desert, which is exactly why David chooses to go there to hide from the king. It wasn’t too long ago that David was in the palace, playing his harp for the king; but the king became jealous of him.

King Saul—tall, strong and handsome, beloved by the nation and popular among his people—that is until this lad killed the giant.  Overnight, David replaced Saul as the nation’s “Person of the Year.”  The people sang: “Saul hath slain his thousands, and David his ten thousands.”  And Saul became consumed with jealousy.  He’s no longer the king he used to be. In God’s eyes, he’s no longer king.  It’s during that time that we read statements such as these:

And Saul cast the javelin; for he said, I will smite David even to the wall with it. And David avoided out of his presence twice  (1 Samuel 18:11).

I count six times that Saul tried to kill David, and for the next thirteen chapters, we find David hiding from the enemy.  Saul’s anger surprised David.

“And David fled from Naioth in Ramah, and came and said before Jonathan, What have I done? what is mine iniquity? and what is my sin before thy father, that he seeketh my life?”  (1 Samuel 20:1)

There’s no answer to David’s question because there is no justification for what Saul was doing to David.  Just as there is no logical explanation for the suffering so many endure today, Sauls still exist in our world today.  Dictators still torment the innocent, and tyrants still take advantage of the vulnerable. Sauls still hunt Davids even in our day.

How does God respond?  Does He destroy the tyrant?  Not always. He has drowned some Pharaohs and killed some Herods, but that has not always been the case.  David was tormented by Saul for fifteen years.

I don’t know how God will deal with your adversity, but I do know how He will deal with you.  He will give you a Friend that sticketh closer than a brother.  Just as God countered Saul with a Jonathan, so also God gives you His Son, the Holy Spirit, your church, and a pastor who care for you in your time of adversity.

Scripture dedicates sixty-six chapters to the story of David’s life—more than any other person in the Bible other than Jesus.  He is mentioned fifty-four times in the New Testament. He would go on to establish the world’s most famous city, Jerusalem—the City of David.  The Son of God would be known as the Son of David. But at the writing of this Scripture, he’s in a cave.

When he was anointed to become Israel’s next king, David couldn’t have imagined himself here.  We would never choose to live in the Cave of Adullam. We prefer to have an air conditioner, a comfortable home, peace, and safety; but there are times when we find ourselves in dry places, desert places, not in a desert in Israel, but in our lives.

Some can identify with David.  Between 1 Samuel chapters 18-22, David’s life goes from bad to worse until he finds himself hiding out in the Cave of Adullam.  It was in that cave that David wrote some of his most amazing Psalms.

Psalm 57 and 142 were written while David was hiding in Adullam.  I encourage you to read them. In these Psalms, we see David finding refuge, security, deliverance, mercy.

We find David singing in his cave, and so can you.  The key is to survive your desert and find your Adullam.  And who knows? The best chapter of your life could be written in Adullam.  You too can sing psalms in the desert, and let God show Himself strong, even in your cave.

The LORD Is Good – The Exultant Sound of His Goodness

Partakers of His Holiness