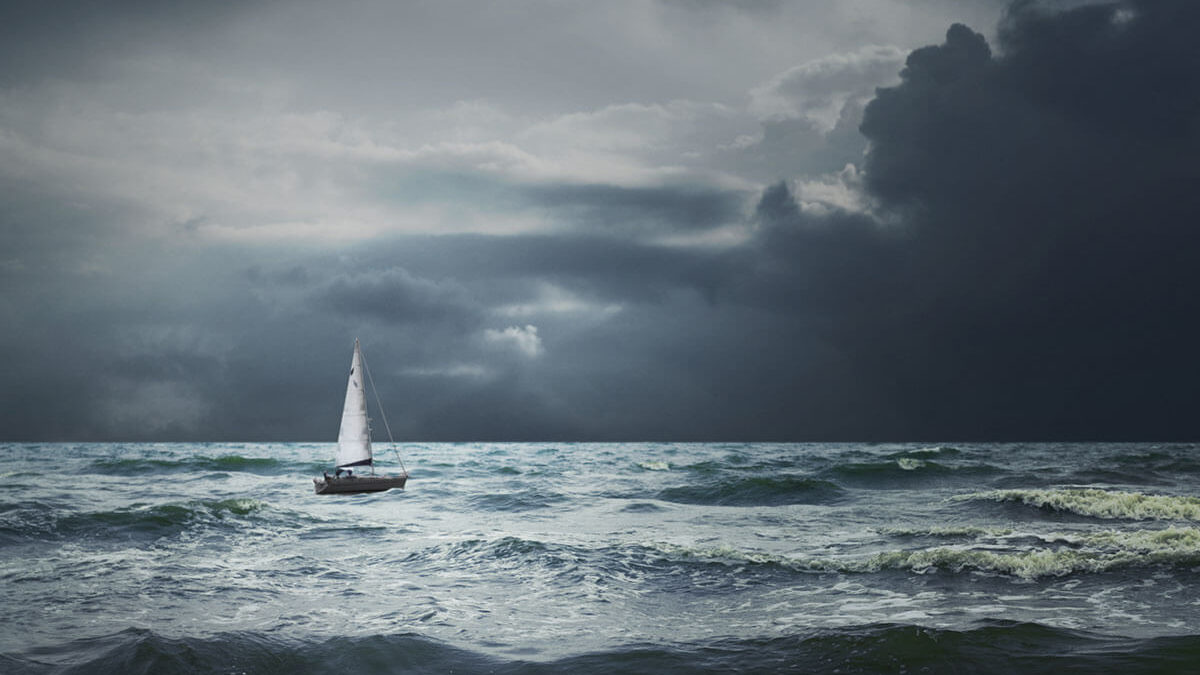 “And he saw them toiling in rowing; for the wind was contrary unto them: and about the fourth watch of the night he cometh unto them, walking upon the sea, and would have passed by them” (Mark 6:48).

During the terrible days of the Blitz in World War II, a father, holding his small son by the hand, ran from a building that had been struck by a bomb. In the front yard was a shell hole. Seeking shelter as quickly as possible, the father jumped into the hole and held up his arms for his son to follow. Terrified, yet hearing his father’s voice telling him to jump, the boy replied, “I can’t see you!” The father, looking up against the sky tinted red by the burning buildings, called to the silhouette of his son, “But I can see you. Jump!” The boy jumped, because he trusted his father. The Christian faith enables us to face life or meet death, not because we can see, but with the certainty that we are seen; not that we know all the answers, but that we are known.

This passage in Mark 6 is a familiar account of Jesus feeding the five thousand.  After the miraculous meal has ended, Jesus sends the disciples across the Sea of Galilee in the ship, and He goes apart into a mountain to pray.  What we don’t often notice is after Jesus prays He seems to have every intention to pass by the disciples as they are struggling in the storm.  He saw them; He knew they were struggling and toiling; yet He intended on passing by!  Why would our loving Savior pass by those in need in the dark night and in the middle of a storm?  To some who are skeptical and unbelieving, this may seem cold and indifferent.  “Where is the compassionate Savior you speak of?” they would say.  It would seem as though He just fed 5,000 people whom He really did not know, yet now He forsakes twelve who served closely with Him.

The greatest lesson we find in this verse is where the Bible says, “and he saw them.”  God is teaching us to trust Him even when we cannot see Him, because He sees us!  There will be many times in your life when you are toiling and rowing through the storms of life feeling alone, and fear will be very real.  The temptation will be there to doubt and falter in your faith.  When circumstances are difficult, the default response by most of us is to hold tightly to what we can see.  Living by sight is a sinful response to fearful situations.  Realize today that God sees you even when you cannot see Him. He knows the fears that you face; and if He seems to pass by, it is because He is giving opportunity for your faith to increase.  Jesus sent the disciples in the direction that they went, knowing the storm would come.  Could it be He wanted them to remember and have faith that if He fed 5,000 people surely He would take care of His own?

Jason Atwood grew up in the Corpus Christi, Texas area, and in November 2006, Pastor Atwood was called to be the first pastor of Heritage Baptist Church of Corpus Christi. The church was meeting in a small one-bedroom house. God blessed, and they moved to a new 5-acre site to allow continued growth. In 2019, God led Pastor Atwood to join our staff. He is a tremendous help to Pastor Trieber in both the church and the college ministry. He is married to Aimee, and they have three boys — Will, Connor, and Jack.