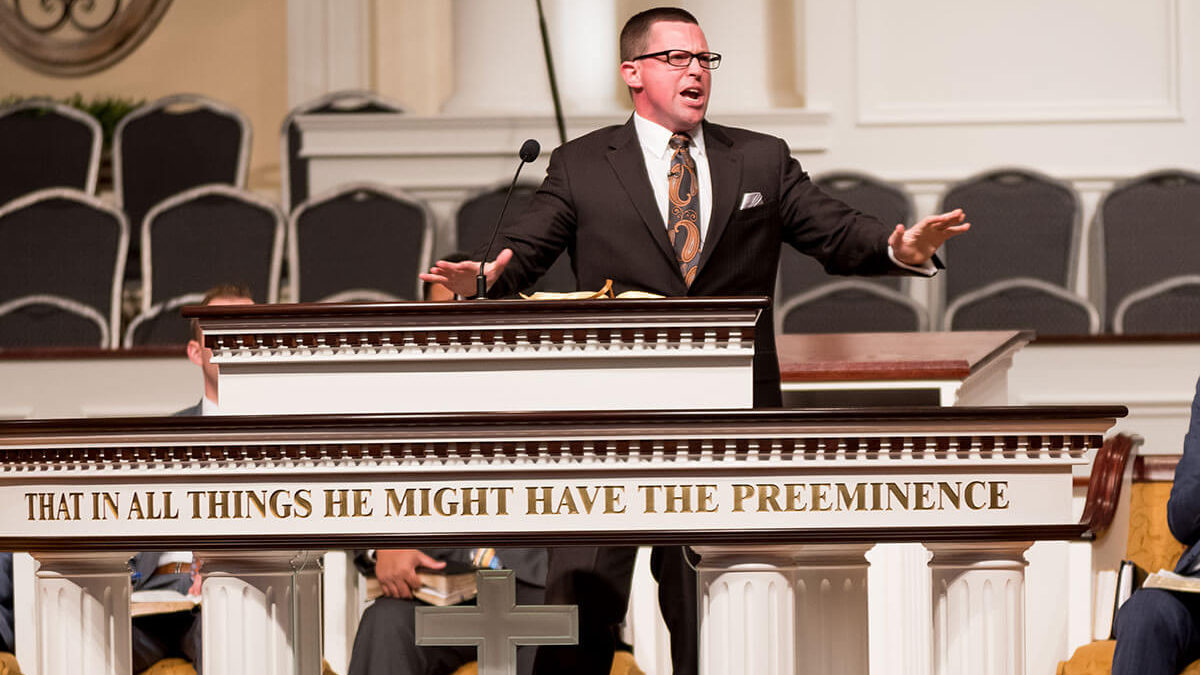 I remember a conversation I had with a couple of elderly ladies at a meeting. I had preached the first night and was heading into the church to preach the second night of services. The ladies stopped me and asked, “Do you always preach like that?” I answered in the affirmative. One responded, “You’re going to preach your voice out!” and quickly the other said, “Forget about his voice, he’s going to preach his head off!” I looked at the sweet old ladies and said, “That’s exactly what I plan to do!”

Christianity is suffering from a spiritual plague today that is weakening what God meant to be strong. This infection is pillaging our churches of power. This outbreak is draining Christian zeal and leaving behind Christian apathy. This pestilence promotes a feeble spirituality, a faint heartbeat for revival, and a peeked hope of potential. There is a disease that is wide-spread and fast sweeping. It is attacking our churches. It is devouring our crowd. It is polluting our circles. This scourge is not invading fundamentalism from without; rather, it is eating fundamentalism from within. You ask what caused this plague, encouraged this disease, brought on this epidemic? The diagnosis is in. We are suffering from spiritual sickness brought on by a dangerously low level of old-fashioned Bible PREACHING!

Thank God for preaching preachers! From the infamous cry of the giant in the Valley of Elah of “Give me a man,” God has gladly continued to answer that request by supplying a man to stand for right, fight for the faith, and proclaim to the world that there is a God in heaven! Every generation has had its “gap-fillers. Every age has had its ambassadors. Every era has those who will make up the hedge for their hour. Society often mocks them. Persecutors try to silence them. Peers sometimes ridicule them. The devil daily tempts them, yet God’s preachers stand out as an unbreakable strand of bright lights against the blackened backdrop of human history.

America stands in desperate need today of a new crop of old-fashion, fundamental, unashamed, bold, compassionate, John the Baptist-like preachers, men of God who aren’t filling a pulpit as a way to pay bills or simply standing behind the sacred desk in an attempt to scratch itching ears, preachers who don’t worry about losing their salary or for that matter their scalp, but men of God who will open up the Bible, fill their lungs up with air, rare back, and PREACH!

John the Baptist was a Dispensational Days man, an Old to New Testament gulf spanner. He was an outcast of society. John the Baptist was a preacher! John was born to devout parents. His very birth was marked by the miraculous. His life was anything but average. He would be a fulfillment of prophecy, a baby of profundity, a man of peculiarity, and a preacher of prophetic power!

Before time was allowed to count down days or the sun was given omnipotent permission to illuminate the sky, God orchestrated the plan of salvation for fallen man through the sacrificial death of the God Man! It’s very significant to realize that six months before Jesus, the God Man, would appear in Bethlehem’s manger, God introduced John, the man of God, to the world.

“But the angel said unto him, Fear not, Zacharias: for thy prayer is heard; and thy wife Elisabeth shall bear thee a son, and thou shalt call his name John.  And thou shalt have joy and gladness; and many shall rejoice at his birth.  For he shall be great in the sight of the Lord and shall drink neither wine nor strong drink; and he shall be filled with the Holy Ghost, even from his mother’s womb.  And many of the children of Israel shall he turn to the Lord their God.  And he shall go before him in the spirit and power of Elias, to turn the hearts of the fathers to the children, and the disobedient to the wisdom of the just; to make ready a people prepared for the Lord” Luke 1:13-17.

John the Baptist’s ministry was not typical, nor was it trendy; but it was tantamount to the purpose of God. Scripture reveals that this preacher was Spirit-filled, separated, straight forward; and he was successful. The Bible describes the methodology of John in the phrase found in Matthew. 3:1: “In those days came John the Baptist preaching.”

John the Baptist was a preacher crying as a voice in the wilderness. He was not the Light, but he was a voice. His motivation was to decrease so that Christ could increase. His sermon was a one-point, spiritual atom bomb of “REPENT;” and when the celestial mushroom cloud dissipated, left behind were converted sinners, awakened saints, and the wreckage of what once was the devil’s dominion. John’s sermons would stir a nation, awaken a sleeping populace, and demand a decision. John’s back was clothed in camel’s hair, his mouth was full of wild honey, his face covered with a prophet’s beard, and he chewed up hell’s hoards like the locusts of the desert. John’s weathered finger would serve as a divine signal pointing out the Lamb of God to lost mankind. John the Baptist was a PREACHER!

Under John the Baptist’s watch, there would be no sins deemed acceptable and no sinners considered exempt from being squared within the crosshairs of the Gospel Gun. Sin in high society was no safer than iniquities in the back alley. Pauper or prince, commoner or king, it was open season on sin, and John the Baptist looked to fill his tag!

Mark 17: “For Herod himself had sent forth and laid hold upon John, and bound him in prison for Herodias’ sake, his brother Philip’s wife: for he had married her.”

King Herod was living in blatant abomination. He was living in adultery. He was a premier pagan, an upper-class low-life, and the preacher could not give sin a pass, even if this sin was wrapped in the royal robe, grasping the royal scepter, and wearing a kingly crown. Low living was fair game, even in high places. The union of Herod to Herodias was mingled with iniquity through and through. Herodias was both Herod’s sister-in-law and his niece, and John the Baptist called Herod’s shady affairs out into the spotlight. No doubt, tormented by conviction and enticed by sinful lust, Herod’s black heart hushes the voice of the Holy Spirit and instead gives ear to the request of his adulteress’s daughter. This party’s centerpiece would not be a cake on a platter, but the preacher’s head upon a charger! As the sensuous shadow of Herodias’s daughter danced upon the walls of the king’s hall, a sword could simultaneously be seen falling upon the neck of the old faithful Baptist preacher.

Mark 6:27-28: “And immediately the king sent an executioner, and commanded his head to be brought: and he went and beheaded him in the prison, And brought his head in a charger, and gave it to the damsel: and the damsel gave it to her mother.”

No doubt as the cold steal descended toward the sun-kissed neck of John, the executioner, the public officials, the other prisoners, and even the rats that made their home in that grimy dungeon got one last shot of old-fashion preaching as the voice of the PREACHER THUNDERED THROUGHOUT THE CELL! The blade may have separated John’s head from his shoulders, but nothing could severe the PREACH from his soul –JOHN WAS A PREACHER; JOHN PREACHED HIS HEAD OFF!

Preachers, let us preach as never sure to preach again, as a dying man to dying men. Sit at the feet of John the Baptist, take up the old man of God’s mantle, mount the pulpit as a soldier would man his post, open your Bible, and PREACH YOUR HEAD OFF!

Mark 1:2 “As it is written in the prophets, Behold I send my messenger before thy face, which shall prepare thy way before thee.”

Every man of God has cause to preach his voice hoarse, his brow sweaty, and his head off because there was a day when the eternal voice of Almighty God beckoned to his heart, birthed a burden in his soul, and whispered in his ear and said, “I want you to be a Bible preacher; now go preach your head off!”

Mark 1:3a “The voice of one crying in the wilderness, Prepare ye the way of the Lord.”

With such an inexhaustible subject as Christ and such a supreme theme as Jesus, every God-called preacher should mount his pulpit with great fervor and preach with intense fire! We have the honor of heralding to the world all about the precious Son of God. Lift up Jesus and preach you head off!

John’s task was to prepare the way for Christ to come. This preparation was not the readying of that which could be seen; rather, it was the making ready of that which was unseen. The state of John’s day was sinful, apathetic, and backslidden at best; and the Baptist’s cry to the populous was to take inventory of their lives, clean out all the filth, and make their hearts ready for their Messiah. His cry was for a crooked populous to straighten up. John the Baptist gave his life to preaching and gave his life for preaching because his society was sinful, God is holy, and the only way the two could ever be reconciled was if the people had their hearts prepared by preaching!

Just one eyeball full of the crooked condition of our country, our churches, and our culture should put enough fuel in the tank of every preacher to keep thundering the Bible in high gear till Jesus calls him home. Preacher, preach your head off telling the masses to get their hearts right!

A Recipe for Contentment - Part 1

A Time To Water